Album Review :: The Lunar Pilots :: Point Of No Return 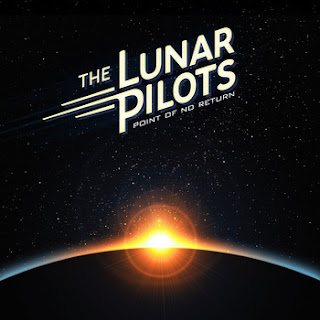 Point Of No Return (digital release)


Essex's The Lunar Pilots are band who have managed to encapsulate a multitude of sounds and aesthetics in a little under an hour. Their debut album 'Point of No Return' spans 15 tracks and 40 years; taking you on a journey of genres, sometimes all in one song. Comprised of Brien Edwards, Paul High, David Elsworth, Keith High and Conor Bailey, this quintet draw on a range of sounds from bands such as The Who right through to more contemporary acts such as Ash.

The first track on the album is 'High On Stars' and is as good as opening track could hope to be. A fuzzy guitar and a brilliantly uplifting synth immediately draws you in and has you tapping your foot before you even realise. Edward's vocals are punchy and powerful and slightly reminiscent of 'Hot Fuss' era Brandon Flowers at times. This track is definite single material. It's radio-friendly, has a huge chorus to back it. 'High On Stars' will be sure to have any venue jumping before the lyrics even start, whereas 'Crash and Burn' draws on more of a brit-pop influence than the tracks it proceeds, and sees the introduction of a dark and light dynamic. With crunchy guitars juxtaposing effortlessly with optimistic pianos, proving that every cloud has a silver lining.

Track 9 'Fall From Grace' starts with an intricate finger picked acoustic guitar and fraught, loaded vocals courtesy of Edward's. David Elsworth's lead guitar is sensational in this; knowing exactly when and where the song needs it and when it doesn't is something he's mastered . It really is the driving force behind what's probably the strongest song on 'Point of No Return'.

'Nowhere to Hide' is a Metallica like romp of a song; the chorus is particularly emotive and hears Edward's vocals sounding most imposing yet. Once again Elsworth's guitar is phenomenal as it shreds it's way towards the albums climax.

The Lunar Pilots have a unquestionable amount of skill between the 5 of them. They have the ability to turn a song on it's head just by changing key; something that's as impressive as it is disconcerting. Edward's vocals are matched only by that of Elsworth's guitar. Between them they create songs that both bludgeon and glide towards their finish, soaring effortlessly before dropping like a bomb to surprisingly heavy depths. This isn't the sort of music I would usually listen to, by any means, but it's something anyone who considers themselves a fan of music should go out of their way to check out.