Album Review :: The Battles Of Winter - Standing At The Floodgates 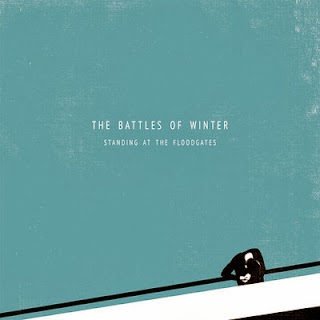 The Battles Of Winter

Standing At The Floodgates


Though plagued with “derailments too numerous to mention”, London-based The Battles Of Winter have, after several years of self-reinvention, finally released their debut album 'Standing At the Floodgates'. Where lesser bands may have broken under the pressures that beset the recording process, the finished product here is an album that feels as coherent as it is concise. Though made up of only eight tracks, '...Floodgates' is a record in which their tenacity, paramount to said recording process, is palpable in each and every track, with the band exhibiting a sense of confidence and self-assurance that could only stem from overcoming the obstacles they've faced over the last few years.

Beginning with 'A Blackout for the Bloodsuckers', the opening to '...Floodgates' hits hard. A relentless rhythm section forms the majority of the track, driving it forward. Vocally, however, the track takes on a life of its own with Alistair Gale's vocals providing an idiosyncratic edge to both song, and band as a whole and while it might not be to everyone's taste, it adds a permanent layer of timbre to an already rich environment.

Tracks such as 'He Fell From Above and Hit the Rocks Below' exhibit a softer side to the band, demonstrating a sound knowledge of both tempo and dynamic changes within a single track, whereas 'My Friend the Scapegoat' chugs along with a Fugazi-like bassline in what is an unsettling track, off kilter and at times foreboding. Paradoxically though, '...Scapegoat' also exhibits an optimistic side, at least throughout the first half, brought on by sparse, major-key guitar licks. All that is blown out of the water, however, after a brooding mid-song lull that rises towards a cacophonous conclusion.

Going out with a bang, 'Standing At the Floodgates' closes with the Pink Floyd-esque 'I Became A Station'. It Is an ambitious track, and one which relishes in its own personal sense of anthemics. The production on it is fantastic too, as is the case across the board, and it's evident that the years in which '...Floodgates' has been in the making, all the scrapped tracks and man hours put in to the sessions, haven't been in vain.

The Battles Of Winter are band with a big sound and big ambitions, and their debut feels like the first stages on the road to becoming something huge. As it stands, it's not a perfect record seeming fairly short for a debut album, however what is there is rich with grand ideas and a great understanding of musical composition that will surely evolve in to something fuller still as the band grow with it.