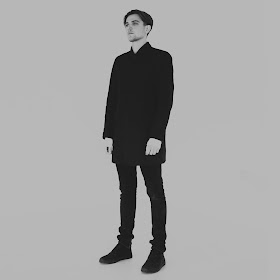 Those with good memories may remember London-based artist George Cosby and 'Ritual Blush' from last spring - that's the 2014 one not this year's - which was when he, and it, both first reared their - very promising - heads. If you look hard enough you will find a number of features from that time, but as are the way of things, the link to the track will now no longer exist.

Fast forward to the present and Mr Cosby returns with said track - and the music blogging world rewrites its posts again. So for second time around, George Cosby has unveiled the still sumptuous 'Ritual Blush' (the song itself goes back even further, having been written in 2013) and will release his three-track debut EP 'Human Touch' on November 20. To tie in with its release he will plays a headline show at new East London venue The Pickle Factory in Hackney on November 24.

‘Human Touch’, produced by Duncan Mills, comprises three quite individual tracks, which together provide a luminous dark-pop oeuvre - with ‘Ritual Blush’, of course, being its star highlight. The song - lyrically referencing bittersweet relationships - shows off Cosby’s impressively gravel-pitched voice as it transcends layers of marching drum beats and electric guitar.

You can also watch him perform 'Vacant Grace' for Burberry Acoustic below from earlier in 2015.