Saturday in Camden Town, north London's tourist map hot spot, is always a major draw for sightseers as well as locals busy on the weekly shop. For this particular June Saturday several thousand more crowded into the area, ready to collect their wristbands from The World’s End, and then set forth around the 25 venues to catch as many of the 250 performing artists as they could, from headliners down to the newly emerging acts.

Dingwalls opened up at noon with the reformed Esprit D’Air hitting the main stage. The London-based Japanese rockers remained sadly long on merchandise and short on tunes. But that didn’t really matter as we were here to take in one of the quirkier acts performing at Camden Rocks, Curse of Lono. The goth rock Londoners have a curious take on Southern Americana and, although their set takes a while to get going, by the end of their allotted thirty minutes they have won over a sparse but appreciative crowd. Lead signer Felix Bechtolsheimer has a warm and engaging voice, even when he’s beating seven shades out of a drum, whilst keyboard player Dani Ruiz Hernandez’s tinkling arpeggios keep a touch of lightness even though, lyrically, this is a very dark band indeed. 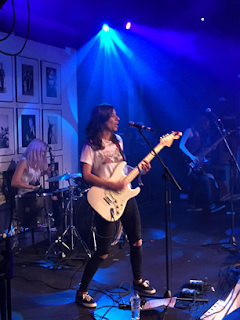 Next door in Proud, the former old stables for the market traders, Berries were also getting underway just after midday. The three London girls play alt-indie/rock with energy, and vocalist Holly has a great voice that soars over the crowd and bounces back of the walls and hits you in the back of the head, while bassist Lauren's style reminds of Peter Hook and Mark Stoermer. Well constructed songs and an ability to connect with a live audience -who were busy dancing - made this a welcome start to the day. 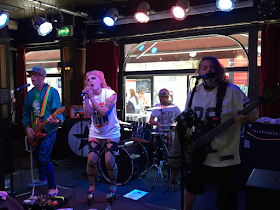 Grunge outfit Tokyo Taboo are completely nuts in style and performance. If you want anarchy on a stage then look no further. With some great hooks and lyrics, not to mention singer Dolly Daggerz dressed in a Corbyn tshirt and suspenders, they got the crowd excited and lapping up their set at The Monarch. A few yards along at the Camden Assembly, symphonic rock group Serpentyne start off well with synths and melodic guitar, but then head full-tilt into prog rock. Never having seen them before, it was hoped that vocalist Maggiebeth Sand might emit Florence Welch type tone, but instead we got Dame Kiri Ta Kanawa belting out the finest operatic voice to be heard at Camden Rocks. It felt a bit dated, but the fans were obviously enjoying it. 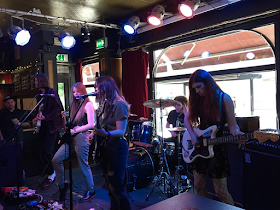 On the other hand, back at The Monarch, Valeras put in an enjoyable set, with material coming from their recently released debut EP 'Knives & Flowers'. The very young, but experienced, Reading five-piece appeared at ease on stage, and there is a feeling they are going to become a bigger name in the future. Watch their space.

The excellent Crowndale venue, a proper music venue with a great sound, was home to some of the day’s heavier acts. Brummies Blank Parody offered nothing terribly special at first, but interestingly, when they turned to their newer, slower, material, they sounded like a much better and more original act. Something to work on there, perhaps. 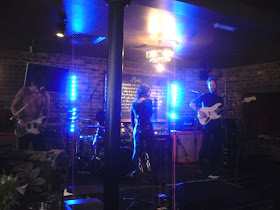 Down at the Mornington Crescent tube end of Camden High Street, Tiny Giant - duo Chloë Alper and Mat Collis, expanded to a four-piece live - tuned up to the almost proverbial one man and his dog in their post-lunch slot at The Lyttelton Arms. Although drawing in more people as their pop prog set progressed, atmosphere was thin on the ground. Alper has a striking voice, and her higher and lighter notes were balanced against the heavier guitars. 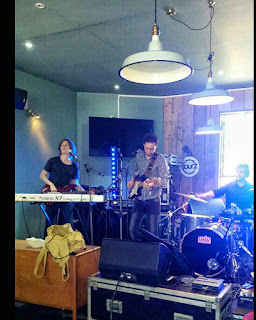 Over the road at the Winnicott, it was the acoustics (terrible), the lighting (worse), and a sound engineer who on at least one occasion managed to cut the feed from a lead singer’s mic without even realising it, that bands were grimly dealing with. Secret Cameras battled gamely with all of the problems but songs like ‘Going Places’, which soar on record, were left flat by the sound difficulties, whilst the band had to abandon ‘Beautiful’ entirely. Despite all of this, numbers such as ‘The Silence’ still got feet tapping and even the smokers outside dancing. 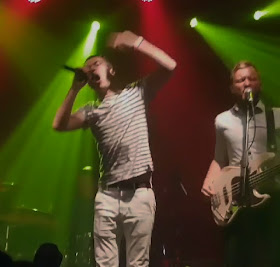 The Electric Ballroom was pretty much taken over by Damned fans for the day, which somewhat skewed the atmosphere. The King Blues started off their mid-afternoon set with an acapella song gathered around one microphone like a barbershop quartet, thereby managing to be pretentious and inaudible at the same time. Things did improve (how could they not), with old punk/hip hop favourites such as ‘The Streets Are Ours’ and ‘Headbutt’ being warmly greeted, and current single ‘Tory Is A Four Letter Word’ going down a predictable storm. 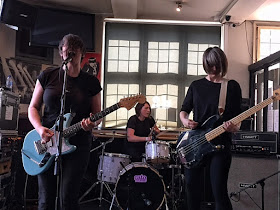 Manchester post-punk group LIINES have an effortless cool sound with a hint of Factory Records mixed with an rocking edge about it. This tight all-female trio has style in abundance, and despite not being the greatest venue sound-wise, the girls luckily knew a few tricks to get the best from it. 'Disappear' and 'Blackout' certainly got the crowd moving. LIINES are probably the best group in this genre on the indie scene at the moment. 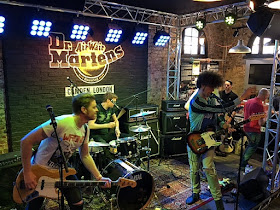 Asylums play the first of their two Rocks' sets in the afternoon at Dr Martens. The Southend four-piece exude energy and as they blast out a set of their crowd-pleasing indie, there's no mistaking these guys are intent on giving a 100% full on crazy and riotous show, from Luke Branch's stage dives to the infectiously melodic songs that come in quick succession.

Leeds four-piece Weirds were a band we caught at The Great Escape where they put on a masterful display of psych-noise fuzz, and were eager to see again. With their debut album just out, these festivals are a good opportunity to live sample some of its wares like 'Phantom', 'Valley of Vision' and 'Things That Crawl', all of which get hammered out in a manic explosion. Frontman Aidan Razzall, who prowls the floor like a stalking wild beast, manages to clear a large section of it at one point as several flee in fear. 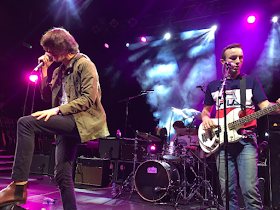 
After their acoustic set on the Kraken Sound Music stage a couple of hours earlier, London-based M O S E S next pitched up at Koko for a full electric set. Charismatic frontman, Bucharest-born Victor, together with this excellent indie rock bandmates, manage to blow the socks right off not just this reviewer, but most others there too going by the response they received. 'River Thames' was a real crowd pleaser that brought the fans out vocally, while 'Leave Leave Leave', their debut single of last autumn, with its rapid guitar riffs and anthemic style, was the highlight. A great set by a band set to go places. 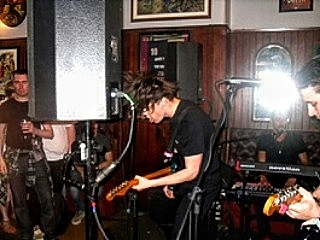 Yungblud, aka Dominic Harrison, was another artist from The Great Escape who particularly impressed, and this opportunity to see him again ply his stuff at The Good Mixer was not one to be missed. He's a relatively new name with just his debut single 'King Charles' online, but that only means you simply have to catch this 19-year-old Doncaster lad in his black hoodie and pink socks - to match tambourine and pedals - with his witty songwriting, infectious alt-rock tunes (not to mention his fancy footwork) and megaphone, live. Sign of a good set must be that you are still humming the tunes days later, as we were with the catchy 'Loner'. 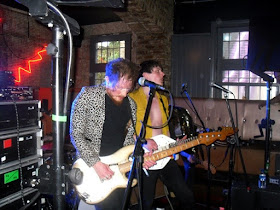 With their scorching energy and abundant riffs, Avalanche Party were an undoubted and unexpected highlight of the day. Not just for the fact that vocalist and guitarist Jordan Bell eerily channels the spirit of Ian Curtis via Jarvis Cocker, but from 'Solid Gold' to new single 'I'm So Wet', their overall performance was a class apart (Bell's playing on top of the bar at one point providing the barman with a new duty of holding the ceiling light to one side) that drew in several other bands on the Rocks bill to watch them play at Be At One, including buddies The Blinders and Brighton duo SONS. 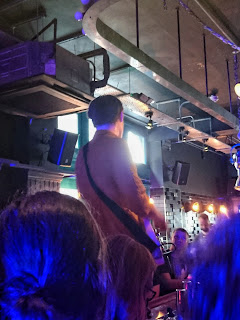 Meanwhile, back at the Winnicott things had still not improved sound-wise when Tim Muddiman and The Strange hit the stage at 5pm. Used to finer things in his other jobs with Pop Will Eat Itself and Gary Numan, Muddiman cut the set short after barely twenty minutes as the band’s songs were rendered even more swampy and distorted than they usually are. Muddiman himself was later seen scowling furiously as the group loaded out. 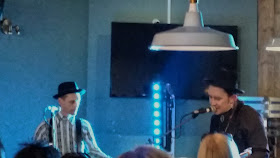 Milton Keynes four-piece Toffees have skilfully mastered the rock/pop divide, as we witness at the Lyttelton Arms. Piers Nolan's vocals, combined with the bass of Joshua Morton, brings a rhythm that you can't help but tap your feet to. Cleverly backed up with co-vocalist Rachael Norton's contribution, Piers belts out the songs like a man possessed, with new single 'Well 'Oh' Well' being particularly effective. 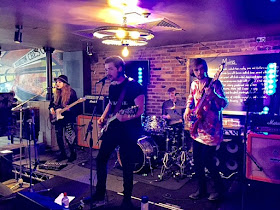 The Hawley Arms played host to Rews and gave the Belfast/London female duo, Shauna Tohill and Collette Williams, a chance to show what they are about: a high octane sound of just a guitar and drums, sharp vocals, drummer focused. Packing out the room with hardly space to swing a cat, with more than one 'industry' bod in the room, you sense the buzz about this pair who are soon to be performing on the legendary John Peel Stage at Glastonbury. A band on the edge of something bigger. 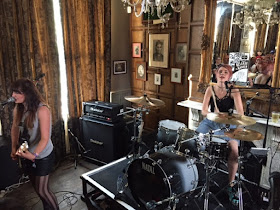