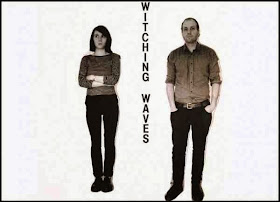 This infectiously likeable lo-fi release is the forthcoming single by London-based Witching Waves. Combining elements of post-punk, they could be a latterday Raincoats on this three-and-a-half minute banger.

The guitar/drums two-piece (Emma Wigham, ex-Weird Menace, and producer Mark Jasper, ex-Bastard Sword), who switch both instruments and vocals, have slowly built up their live reputation, playing numerous shows around London since they formed 12 months ago.

'Concrete', b/w 'Chain of Command', is out on April 21 via Soft Power Records.

Witching Waves play The Windmill, Brixton on April 1, followed by Power Lunches, Hackney on May 1.