Track Of The Day :: Cruising - You Made Me Do That 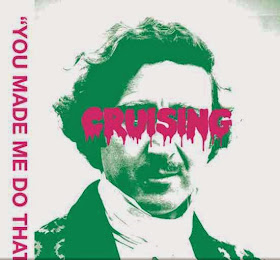 Out on April 28 comes the punk scorcher of a scuzz fest that is Cruising's 'You Made Me Do That'. the very nature of its recording and punk vocalizations is guaranteed to be one that will either be bowed down to in praise, or swiftly turned off. Here at Little Indie we fall firmly into the former camp.

Hailing from Dublin and Belfast, Cruising are a Kraut/post-punk inspired party band. And should there either be something vaguely familiar in amidst its three-and-a-half minutes, it may be that the outfit is made up of members of Girls Names, September Girls, Logikparty and Sea Pinks.

After playing their first gig in January,  and recording whatever they come up with on the nearest phone or handheld recorder as they go, this first release is as DIY as it comes: the recording and song itself was the result of the first time the band had ever played in a room together and has been described as "a grimy, brooding depraved slice of fucked up distorted subterranean punk".

'You Made Me Do That' is out on cassette tape on April 28 thru Soft Power Records and limited to 100 copies.