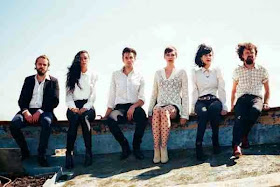 The follow-up to the equally impressive 'Jackson' and debut 'I Get High If You Get High', and produced by Jim Sclavunos (Nick Cave & The Bad Seeds), this is another assured taste of what the band may have in store on their debut album, set for release at end of the year.

Taking their name from a 60’s spaghetti western is apt for 'Vacant Hearts' which comes on big like Clint Eastwood strolling through a desert town with ten-gallon hat and pistol fire at the ready. Lola Colt's captivating Danish vocalist Gun adding just the right amount of alluring vocal to provide colour to this psych-rich blaster of a track.

Lola Colt play a launch show for 'Vacant Hearts' at OSLO in London on June 4.