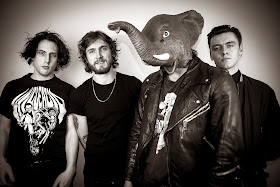 Okay, it sort of had to be, didn't it. Could we here at Little Indie really let a track from Loom pass by without so much as a mention? Had it not been this particular one, unveiled today by the band as their next single, it would have been slightly easier, that's for sure. However, 'Yosoko' is, in our books, one of the best - and most commercial - things they have done so far.

Loom in their 18-month-or-so existence, have come to personify the post punk  in the angry growls from vocalist Tarik Badwan, and loud thrashing ferocious whacks of their instruments from the two guitarists and drum maestro - and sometimes at the expense of showing that they are a band who are about a lot more than being just all about the show with little substance when you break it all apart.

'Yosoko' - produced by the band in conjunction with John Coxon and Mark Ralph - whilst retaining the integral Loom spirit, goes a step further in being not just a track with a real melody, but one in which Badwan fully comes into his own as vocalist. But real credit goes to the twin whirling dervishes of Matt Marsh and Josh Fitzgerald who too often are overlooked in their role as the vital back-up to the forceful presence of their frontman. Here they give the track the essential essence of some quite ear-ripping quality riffage, with third musketeer Neil Byrne packing in the solid drums to gel it all together.

A blistering belter of a track.

'Yosoko' is out on May 5 thru General Chang Records.