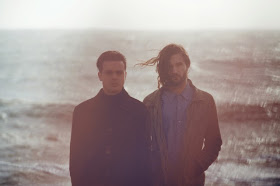 Always a sure sign of a good track when halfway through the first hearing you've already made up your mind that you're going in for a second, third, fourth....by the time we got up to seven it was a given that the new single from Champs was going to make Track Of The Day.

Champs - Isle of Wight-based brothers Michael and David Champion - released their acclaimed debut album, 'Down Like Gold' (which also contains previous singles 'My Spirit Is Broken', 'Savannah', 'St Peters'), back in March - from where 'White Satellite' is taken. The single Is set for release on June 16 thru Play It Again Sam.

Like The Everlys and The Beach Boys, in their Sixties heyday, there is a unique and striking depth to their vocal harmonies. 'White Satellite' has an immediacy to it, with its multi-layering, catchy chorus line and synths that work just to the right level without taking over.

The PR blurb describes it as 'sublime'. And for once, we totally agree.