Track Of The Day :: Dantevilles - Graffiti 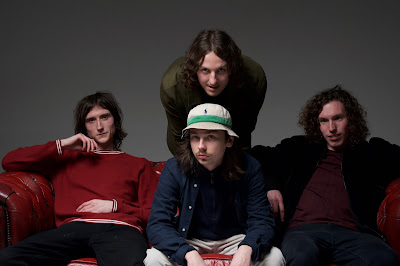 Released on March 3 via Heist or Hit, 'Graffiti' is the new single from Manchester's Dantevilles - the band Little Indie introduced here almost two years ago with their debut 'It Might Be Tomorrow'.

With 'Graffiti', produced by Gary Hadfield (Blueprint Studios) and mixed by Phil Bulleyment (Dutch Uncles, Slow Readers Club), the four-piece have pulled out a tasty, infectious little number, which should serve them well ahead of their upcoming UK tour.

Having sparked comparisons to The Maccabees, 'Graffiti' grabs attention through its upbeat, punchy delivery with Jamie Gallagher (guitar, vocals) and Connor McNicholas' (bass, vocals) duelling lead vocals played off over tightly drawn guitars and arresting hooks in a fast-paced three-minutes.

“'Graffiti'," say the band, is "all about escapism. The actual art form of graffiti is about expression with the ability to stay discreet. It’s something completely original, individual and non-conformist. It can be whatever the listeners want to draw relations to. Be that love, lust or travel. The song is about standing out above everyone else.”

Dantevilles head out on their Grafitti tour next weekend. See below for dates.