6 acts rockin Camden Rocks you may not know, but may want to hear 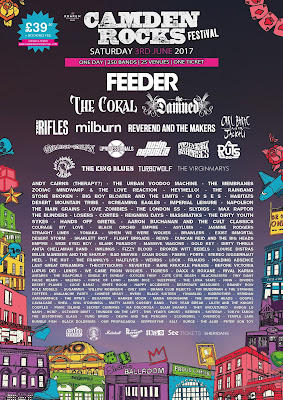 Camden’s annual late spring festival, Camden Rocks, takes place next Saturday, June 3. Welsh stalwarts Feeder headline, with a host of other big names, such as The Coral and The Damned. With over 200 acts on the bill, spread over 25 locations, it is a huge event, so while attention may be focused on the top draws, Richard O'Hagan casts an ear over a few of those you may not have heard of and may be worth checking out on the day.


Saint Leonard’s Horses
Fronted by the brilliantly bonkers Kieran Leonard, this band released one of the albums of 2016 back in November. Stylistically, Leonard is all over the place, veering from late 1970s ELO to Hozier via all possible stations in between. Lyrically, he’s one of the wittiest men around. And a band who do their recording in Stanley Kubrick’s old house can’t fail to put on a show, can they?


Tim Muddiman and The Strange
Connoisseurs of early 1990’s indie will know Muddiman as the one of Pop Will Eat Itself’s revolving trio of guitarists who isn’t Adam Mole or The Buzzard, but he’s always been an artist in his own right (he’s also Gary Numan’s current producer and bass player) and all of his influences come to bear in his band’s sound. There’s touches of Nine Inch Nails, there’s some rockabilly, there’s even some – dare we say it? – grunge. Muddiman himself has an engaging stage presence and the band’s live performances are always a treat.


Curse of Lono
Felix Bechtolsheimer tried to give up music back in 2009 when his previous band, Hey Negita, folded. Eight years and one unpublished book later he’s returned with Curse of Lono, named after a Hunter S. Thompson novel and every bit as eccentric. Their cinematic sound is rooted at the place where southern rock meets goth and should be immense in any sized venue.


Secret Cameras
Londoners Secret Cameras get an early shot at one of the newer venues to Camden Rocks, The Winnicott, when they take the stage at 2pm. Expect elegantly crafted songs and a lot of noise as guitarist Kristian Keen unleashes his inner Kevin Shields over the top of Itamar Starets’ soaring vocal.


Yuck
Okay, we’re not exactly pushing the boat out with this pick, except that this is a band who once seemed destined for a higher perch on the roster, only to lose momentum when original vocalist Daniel Blumberg left after their debut album was released. They’ve put out two albums since then and their material – and their live shows – remains as loud and engaging as ever.

If you want to catch one of the original punks, then check out The London SS. When they formed back in 1975, Mick Jones was their guitarist. Subsequent line-ups have featured Tony James on bass and Brian James on guitar. Only drummer Geir Wade remains of the original line-up, but this is the band that sired The Clash, Generation X and The Damned, so you’ll definitely be watching a piece of musical history

For tickets and further information on Camden Rocks, head here.