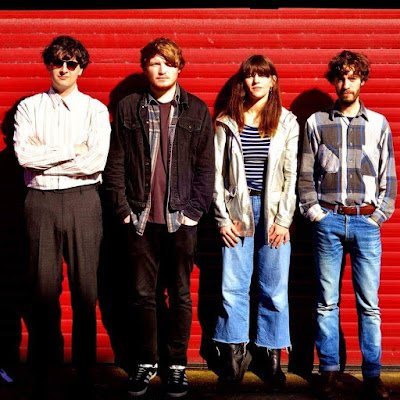 Arriving last month with debut single, the upbeat, psych-influenced 'Hey, Hey Tiger!', new Liverpool quartet Seatbelts is the project of Hooton Tennis Club's James Madden and Ryan Murphy, and the single is the first cut to come from their forthcoming debut EP, 'Songs For Vonnegut', expected in May. Second single, 'A World Drained Of Wonder', is released on April 27.

I am Ryan Murphy, currently one quarter of Seatbelts. I play bass, guitar and provide vocals. James Madden does the same, Abi Woods provides vocals, keyboards and guitars, and Alex Quinn is our drummer and sample pad/percussionist extraordinaire. We sometimes have other people in the band, but for now this is the line-up. This is the chemistry.

Tell us something about yourself and how you came to be where you are today?

I am from Chester, I got to Liverpool via train. I studied Popular Music at LJMU and have been making and performing music for a long, long time. James and I have collaborated on various projects over the years. We hope to go on making music together for many more years to come. Abi and Alex are good friends of ours, we met in Liverpool, found we had similar interests, and ultimately formed this project.

Time-old-cliché: it's quite varied. We all listen to lots of different things, from Rock 'n' Roll and Pop to Soul and Hip-Hop, R&B and Jazz... We all like The Beatles, The Beach Boys, Talking Heads, David Bowie, Joni Mitchell. The list goes on. I've recently been getting super into Janelle Monáe - obviously Prince, too. Great stuff! We're influenced by a broad range of mediums; we watch a lot of films, read a fair few books. Painting and photography can have a big influence on our musical creativity, too. It's all important, creativity is an open game - a full-contact sport.

We do this and that and the other... The writing and recording for the project mostly takes place in my house, the infamous ‘Garlic Mansion’. The songs are often swapped and reworked; we try to develop each other’s ideas. We have 99% trust in each other. In our tastes, playing ability and overall judgement.

'A World Drained Of Wonder' is the opening track of the ‘Songs For Vonnegut’ EP. It's a bit on the 'darker' side of our songwriting, musically taking a more straight-up, classic ‘ballad'-rock approach. We were going for a hybrid of Kurt Vonnegut’s grey-skied science fiction, and something that wouldn’t sound out of place on ‘Trouble Is A Lonesome Town’ by Lee Hazelwood. We love that record!

We also wanted an element of doubt, vulnerability, and perhaps concern, in the delivery of the lyrics. The “Frozen fearing fortune fades, worried we made a big mistake.”, is all monochrome, doom-and-gloom realism. These are real issues we're trying to address. I don't know... I see ‘A World Drained of Wonder’ as a sort of vignette of a society deprived of inspiration, of potentially dark times ahead. I think as a species we need to watch ourselves - become more aware of our actions. Otherwise we're going to be living in a real word drained of wonder.

Well, we plan to release the 'Songs For Vonnegut' EP in May, then we've got music video ideas we'd like to get working on. We've got a handful more songs recorded, with the idea of maybe doing another EP later in the year. We're not really sure. Playing live is the way forwards, we want to do as many shows as we possibly can - it's always great fun.

You can find us in all the usual places, Bandcamp, Spotify, SoundCloud, iTunes, etc.