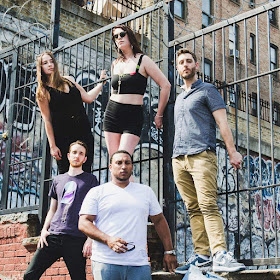 The Bronx five-piece fuse a retro soul with R&B and electro-pop, to produce something that is both contemporary as much as nostalgic, with swooning vocals, staccato guitars, and a winding rhythm.

Brooks Thomas is the brainchild of Danny McDonald, who concocts unconventional songs that are inspired by classic soul and contemporary artists like Dirty Projectors and Miguel. And he's on a winner here.

"This is a song about the comfort of sharing a bed with someone very close to you," says McDonald. "The verses describe scenes of drinking and hooking up with random people, while the chorus concludes that the only thing I'm really looking for is a peaceful sleep.

"The song comes from the time right after Colleen Cadogen, our other singer, and I broke up, when we weren't even sure if we were going to keep the band together. We were both in rough places, out partying almost every night. One night, we made amends, decided to keep working together, hung out all night and eventually found ourselves sleeping together, not sexually, just peacefully. Neither of us had been sleeping much so it was a seriously important sleep for both of us. It felt like a drug. Thus, the line, 'She gave me that good sleep, like I dropped bars'."