Track Of The Day :: Made Of Eyes - Misery 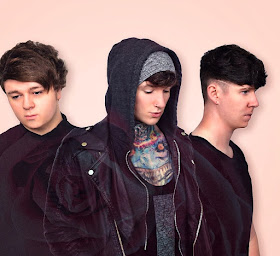 We have to admit we only came across Glasgow trio Made Of Eyes - Jon Ross "JR" Campbell, Liam Browne and Jason Stewart - after Amazing Radio's Jim Gellatly tweeted his article from the Scottish Sun on them; our attention caught, not so much by the reference to new single 'Misery', but how they were described as having been around for five years. We looked at the accompanying picture - see above - and wondered if they were child prodigies as they even now didn't look more than about 16! (They are in fact all in their early twenties... with youthful genes.)

This latest cut - released last week - is a follow up to their recent debut 'Room To Breathe, and despite being only two tracks in, they have picked up a buzz with over 17k Twitter followers already - though they had put out an earlier EP, 'Bonds', but seem to have been working on developing their sound since before this new 'push' this year.

"Yeah, me and Jason (lead guitar, vocals, piano) started the band a few years ago and we released a sort of trial EP kinda quickly, but with the guys in the band at the time, the sound we were creating wasn't really in respect of Jason and I's original vision," vocalist and guitarist JR tells Little Indie.

"So we pretty much decided to take a year out to sort of ‘rebrand’ the band, over the last year we got together with Liam (bassist and synth player), which kinda completed us. So we hit the studio and wrote a tonne of songs together - probably enough for a couple of albums, to be honest!"

'Misery' is one of those songs, which JR alludes to as "pretty much a huge metaphor". An alt-rock number split through with soaring guitars and electronic synth, its title giving a more sombre impression than the sound itself.

Lyrically, the song contains much about relationships. "On the surface it suggests a relationship going through tough times," JR adds," but the track is actually about our band's relationship with music at the time when we took our year out. It was really tough, we had a lot of momentum and we sort of had to start afresh. But we had so much more left in us, so me and Jason sort of took things into our own hands."

Listen to 'Misery' below, and check out Made Of Eyes further on Facebook