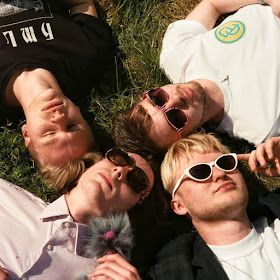 Without knowing a thing about this band, a chance stumble on their debut single was a fortuitous one.

Book Klub's 'Care' at first feels like a cross between The Smiths and Chapel Club, but then in the last 50 seconds, gives over to something - or rather, someone - else. It took a few listens whilst scratching head and delving deep into the memory bank to come up with who it could be they reminded me of, then it came in a flash: early TOY, particularly in the vocal style of guitarist and frontman Reece Robertson - which is part Tom Dougall, filled out with a Lewis Bowman depth!

That said, it couldn't have pleased yours truly more, who has pretty much had this on repeat play over the last few days. It is a damn fine single.

Released on July 12, as debuts go, 'Care' is a bloody great first go, from its propulsive drum opening, synth lines and addictive bassline, to the already mentioned ear-worthy vocals of Robertson.

"It's a song about reaching the end of the road with your whole life behind you, and having nowhere left to turn," drummer Jack Martin reveals to Little Indie. "We've always found it hard to put our selves into a genre, we take influence from classic bands such as The Cure and The Smiths, but we also like modern acts such as King Krule and The Garden. We try to deliver catchy and memorable songs, whilst continuing to experiment and develop our sound."

'Catchy' and 'memorable' certainly describe 'Care'. See what you think.