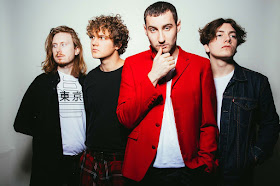 "The song came together in a backwards fashion in a hotel after our debut European gig in Barcelona," says guitarist Rory Young. "It was originally written as an electronic track about being far away. Replacing the synths with guitars back in London gave the track an absolute new lease of life."

As is always guaranteed with any work from this four-piece, it's anthemic, instantly 'gettable' and with Henry Camamile stamping his distinctive voice across the top, bound to be another winner from the band's impressive arsenal of big tunes. The pounding drums and guitar in the opening 15 seconds are an enticing lead in, that do make you want to get up a lot closer to Sea Girls.

And that you can, as the band have a raft of summer dates upcoming, before they embark on an October UK tour. See all dates below.