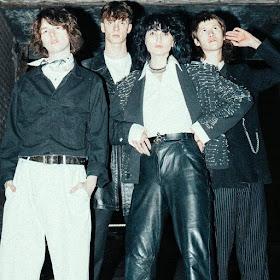 Lucia and the Best Boys are hitting the ground running, releasing both a brand new single, 'City Of Angels', and a new EP called 'Eternity', both out now via Sweet Jane Recordings.

The record, which you can stream below, features three band new tracks - lead single 'City Of Angels', live favourite 'Flames' and 'My God', as well as previous single 'Good Girls Do Bad Things' - and was recorded in LA with producer Carlos De La Garza (Paramore, Wolf Alice, Best Coast).

It sees the Scottish outfit dive headfirst into their 80s inspirations like Madonna, the Yeah Yeah Yeahs, Stevie Nicks, New Order and Human League, while also retaining the fierceness of their 90s grunge, Courtney Love-esque bent.

"'City of Angels' is for anyone who has ever felt unaccepted in society, and trapped in a mindset of anxiety," says frontwoman Lucia Fairfull of the lead track. "People are constantly judging themselves, others, and comparing the two, which is now intensified by social media. The point is that we do not live in a world full of perfect people (A city of Angels), everyone is entitled to originality, flaws, and no one should feel the need to suppress their personality for the sake of someone else, who probably has also felt the same way."