Track Of The Day :: TV People - Time Eats Up 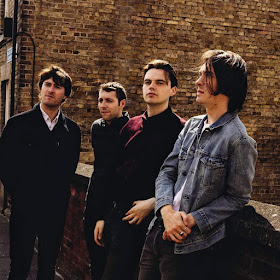 After their 'Kitchen Sinking' from earlier this year, Dublin's TV People return with new second single, 'Time Eats Up'.

Having only formed last year, the quartet have wasted no time in showing their garage rock-meets-post-punk chops. Coming in under two and a half minutes, and featuring thrashing drums, layered guitar riffs and Paul Donohoe's strong lead vocal, this new release, mixed by Dan Doherty at Darklands Audio (Fontaines D.C., Vulpynes), explores the intensity of solitude and isolation - pretty apt for the present climate of self-isolation due to the coronavirus pandemic.

"I wrote the lyrics for 'Time Eats Up' at the tail end of a six-month spell of unemployment," explains Donohoe. "I think we really managed to capture the mixed emotions of that idle state of existence in the song. The feelings of liberation that come with sitting idle and how these conflict with the dread that time is passing you by were a huge influence in the songwriting process for us.

"I came to view time as a very sinister and oppressive force and we tried to get this across in the music. As the song progresses, the sounds begin to get a bit heavier and sharper. We wanted the intensity of the outro to swallow up the more melodic sounds from the song's earlier verses as a way to convey the toxicity of that way of living."