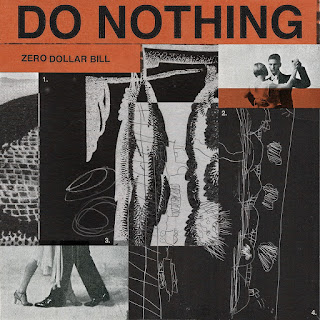 Nottingham-based quartet Do Nothing are truly an eccentric group who have captured the attention of the music industry, despite only having a limited array of releases. Having garnered acclaim due to their eye-catching and ever-changing live performance, great hype has naturally preceded this eagerly awaited debut EP.

The five-track record doesn't disappoint, providing an enjoyable 17-minute listen. For a debut EP the band sound incredibly confident and knowledgeable about who they are and what their music represents, using their alternative brand of post-punk to cement their stance as one of the country's fastest growing indie bands.

The EP starts with ‘Comedy Gold’. As an introduction to Do Nothing this is a fantastic way to begin. The monotone delivery of lead vocalist Chris Bailey is not only endearing, but keeps your attention focused throughout the song and the entire EP. Next up, ‘New Life', is the most positive song on a collection which deals with heavy themes and topics; while the pop-punk meets funk rhythms of 'Lebron James’ is a fantastically lyrical sprint, which uses sinister imagery and wording to tell the story of the world's con-men and tricksters.

The most notable songs, however, are 'Contraband' and 'Fits'. The former may be Do Nothing’s most creative song, and in my opinion the strongest on the entire EP;  a terrific mixture of Bailey’s vocals alongside lyrics which vocalise the anger and grief, make this song a must listen. Finally, ‘Fits’, the last song of the EP, is maybe the one I enjoyed the most. This song - described by Bailey as "that sad little feeling of drifting away from things that meant a lot to you when you were younger" - just has something about it which makes it relatable and connects. It’s a fabulous ending to an overall exceptional first outing.