Track Of The Day :: Odd Morris - Your Four Walls 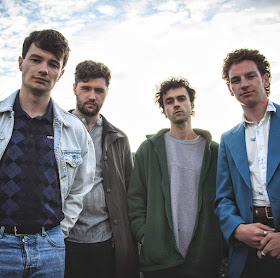 Since they emerged with debut single ‘What Might Be’ in March last year, the Dublin post-punk quartet have shown they have a way with the dark and melodious, and here on this sharply produced track, they nail that brooding tension from the off.

The band describe 'Your Four Walls' as a homage to the buildings, houses and cityscape of Dublin, and was originally a poem written by singer and guitarist Daragh Griffin about an old Georgian house across the street from his flat. He initially painted the building, and through this new lens of observing, a poem came to mind. The poem speaks of the structure of the house, how it's framework provided a safe place to spend a lifetime. It could also be a metaphor for the support, warmth and reassurance one receives from a loving relationship.

It is possibly the band's best single yet. Steadily rising from the sterling drum work of Sam Martin, it provides a base for Griffin’s haunting and penetrating vocals to arrive, while he and Kris Hassett are both supremely resplendent, encouraging their urgent guitars to sound like chiming ripples.

With Ciarán 'Mac' McCarthy's (who also has to be applauded for his production work here) rumbling bass added to the mix, all interwoven with steady adeptness and intent, 'Your Four Walls' marks Odd Morris down as one of the best of the current wave of Irish bands.