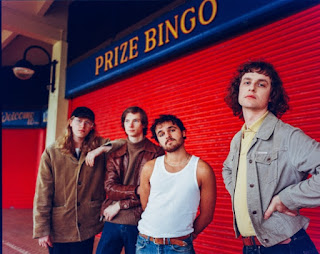 Following on from 'The Non-Stop EP',  the track was written while on tour with Our Girl in 2018, and fuses the idea of nuclear devastation with stickin’ it to the man, all while exuding all the trademark BBB rock’n’roll swagger.

“‘30,000 Megabucks’ was inspired by a seemingly ridiculous but very real request from an old publishing agency that I was with, who wanted £30,000 to release me from the deal," explains frontman Tom Rees. "It all turned out fine in the end, but back then I was so furious that I decided to put pen to paper to ‘take down the man’ as it were. The ‘Mega’ element comes from the total amount of nuclear bombing power required to completely devastate all human life on planet Earth, which is 30,000 megatons.

"I had been watching a lot of Chernobyl documentaries and also a film called Threads, so a small part of me was quite excited when they asked for £30k because the narrative locked in quite well. For that reason it was sure to be a hit - take that, man! We used to play the riff in sound check just because it sounded like AC/DC  and we even played it as one of the walk-on songs on Soccer AM when we were on there. When we play it live it goes on for like fifteen minutes!”

The band have also announced a live stream event THE BEAUTIFUL SHOW, which will combinelive performances from themselves, as well as appearances from some very special guests, all from Cardiff Bay’s Portland House - the building where the first ever £1,000,000 cheque was cashed. THE BEAUTIFUL SHOW will be broadcast live at 7pm BST on December 9 and available to watch on demand for 24 hours for viewers around the globe. Tickets can be purchased HERE.