Calva Louise are on 'Trial' on latest single 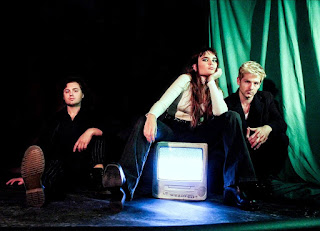 The bold and oscillating three-minute exploration of self-identity, is a homage to Bohemian novelist Franz Kafka’s best-known novel ‘The Trial’ which tells the story of protagonist Josef K., who is arrested and prosecuted by a hidden authority, with the nature of his crime unknown to neither him or to the reader.

The cinematic video for 'Trial" was filmed by the trio during lockdown on an iPhone, with vocalist Jess Allanic adding in her own animation.

“A storm of lightning and meteorites points to wanton destruction," she says of the visual. "A person runs carefree and fearless until she finds her own image trapped in a holographic false reality, becoming aware that she is inside a human-scale video game where her capacity for submission is put to the test. Upon realizing that all is a projection, the game ends. Only confusion could induce her to restart the trial, unless she dares to break out of that sordid game. This is the game of any society that imposes incoherent rules, in fact, this is as absurd as the Kafkaesque Trial”.