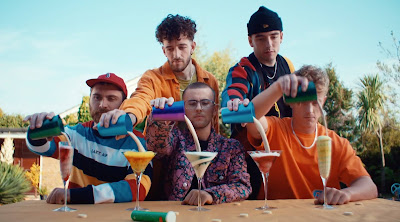 "Like most of us," says frontman Murray Matravers, "I've spent the whole year sat at home daydreaming about a possible alternate reality. Born out of boredom and idleness, 'Daydreams' is as much about getting drunk as it is about falling in and out of love."

The clip for ‘Daydreams’ is described by Siedentopf as a ”homage to careless nostalgic summer days and the classic battle between daydreaming and the actual mundane reality. Throughout the video we follow Murray as he dreams up beautiful and idyllic scenes in sunflowers fields together with his dream girl which in the next moment are turned into an anticlimactic opposite; the mundane reality where Murray is alone has nothing better to do than to sit around and day-drink.

"The entire video was shot with an experimental camera which is meant to help create a dissociating feeling similar to a daydream or while day drinking.”