Malady make their debut with ‘London, I Love You but You’re Bringing Me Down’ 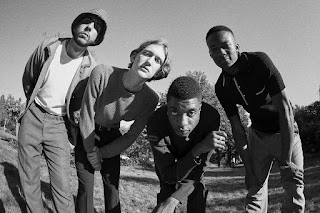 New London four-piece Malady arrive today (October 30) with this, their debut single, ‘London, I Love You but You’re Bringing Me Down’, released on Nice Swan Records.

Produced by Eduardo De La Paz and  guitarist Charlie Clark, it makes for a strong first outing. The infectious grower - which explores the band’s complicated relationship with the capital - is an upbeat, nighttime breeze that comes with a glossy mix of late 00s indie, dub, and electronica.

“I must’ve heard LCD Soundsystem’s ‘New York, I Love You But You’re Bringing Me Down’ and thought the love-hate sentiment behind the tune mirrored the feelings I had, and still have, with London," explains vocalist/ guitarist Percy Junior Cobbinah.

"The topic of the tune isn’t news to anyone but it felt necessary to document the confusion and sadness felt by how inaccessible and hostile the city is becoming to live in for most ordinary people who have most, if not all, of their lives here.”