It's all about the money, honey, on Mealtime's 'Moneybag' 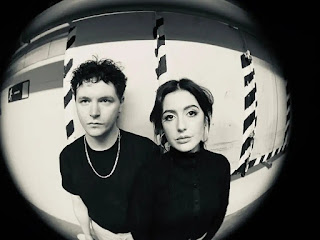 New single 'Moneybag', out now via LAB Records, is a fizzing alt-pop track that sees the band fantasising about plotting a bank heist. The track is accompanied by a video directed by Hayley Rawlings, placing lead singers Sam and Georgia against stark, industrial backdrops as neon images of currency slice across the lyrics of the track.

Compressed guitars buzz against brash lyricism delivered with deadpan relish by Georgia and Sam. However, beneath the bells and whistles of the production lies a deeper message.

“Written during a long period of floating between unemployment and minimum wage, after which plotting a bank heist actually seemed like a pretty viable option," they say.

“The beat’s cheap, dark and broody. We worked really hard to get this contrast between that grit and these glamorous grand piano hooks, so it almost sounds like someone fantasising - the old cartoons with dollar signs in their eyes and dribbling at the thought of being able to afford a steak bake and the bus home."