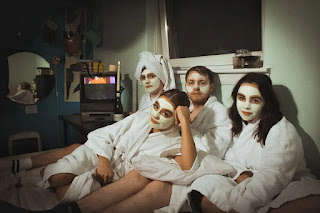 Spyres are back with a new release, ‘I Don’t Care'.

Recorded at 7 West Studios with Chris Marshall and Johnny Madden, the follow-up to ‘Fake ID' from the start of the year, sees the Glasgow band power through their range of combining charming pop vocals with meaty drums, soaring guitar riffs, and a close to four-minute run through catchy melodies.

“It feels like a pure coming of age song, like it could be in a movie!" remarks vocalist and guitarist Keira McGuire. "We had to adjust to a new studio since Lo-Fi (previous studio) closed due to COVID, and we couldn’t do things the way we usually do but we worked around it. I remember when we went to write it, we were trying to think like ‘what should we write about?’

"It was pure weird because Me and Emily [vocalist/guitarist Downie] haven’t written a song like this before but it came together. We even made some of the lyrics up five minutes before getting into the studio.”

“When a few of the restrictions were lifted," Downie adds, "we went straight into the studio and started writing something new, trying to do something different and ‘I Don’t Care’ is the sum of that."