The Vegan Leather are roamin' in the ‘Gloaming’ on new visuals 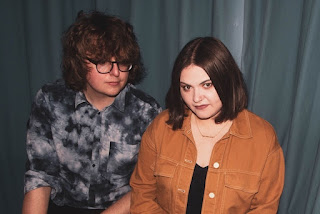 Paisley art-pop outfit The Vegan Leather have shared new animated  visuals for their recent single ‘Gloaming’, on which they worked with digital artist and previous collaborator Bovine.

Inspired by surrealist cartoons and video games of the early 2000, the cinematic clip depicts a group of creatures making their way across dark, otherworldly andscapes before eventually descending on their own ‘Atlantis’; in this case The Vegan Leather’s Paisley hometown.

“We worked with Bovine on our album artwork and other materials last year and because we trust him so much, we gave him this new song back in February and let him run free," said Gianluca Bernacchi. "He got back to us a couple of months later with the test footage and we were absolutely blown away. He took the reins on this project and the results have been amazing.”