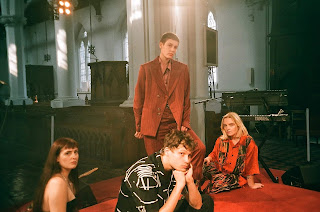 Mercury Music Prize nominated Brighton band Porridge Radio have covered Leonard Cohen’s 'Who by Fire', which comes from his 'New Skin for the Old Ceremony' album.

“I’ve loved Leonard Cohen since I was a teenager, and when he died we learnt this song in tribute to him,” says vocalist Dana Margolin. “It’s always been a favourite of ours so we were really happy to record it for our session at St Giles’ Church, Camberwell. The lyrics are from the Jewish liturgy for the new year (Rosh Hashana), and this was filmed the same week as Rosh Hashana this year.”

Watch the El Hardwick directed clip of the performance below.