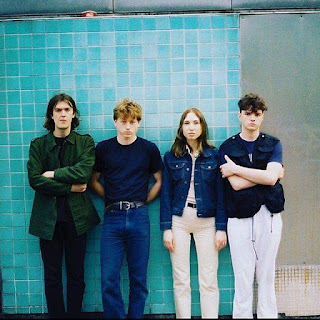 Taken from the band's just-released self-titled debut album, the track is an homage to the Northern poet.

"I think John Cooper Clarke is a Northern icon," says Sydney Minsky-Sargeant. "One of the last survivors of that era, going back into that period of time where he lived with Nico and lived in Hebden Bridge, which is down the road from me. He’s just a proper punk, and one of the last remaining punks there is. Now Andrew Weatherall’s dead, and people like that have fallen, he’s still going. He just does it how he wants to do it, and I think that’s quite admirable, as a creative."

"My idea behind this video was to show three different generations and situations of celebrating with as little to do with JCC as possible and if I said anymore I’d be lying," adds Baker. "I just wanted to make something fun in these hard times and visually tell all the screwballs to relax and keep your peckers up."