'Everything Will Be Fine' for The Ninth Wave 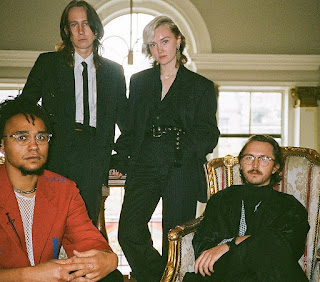 Glasgow's The Ninth Wave today drop new single 'Everything Will Be Fine', the first new music to be heard since the band's Faris Badwan-produced EP ‘Happy Days!’

The dark emotive pop 'Everything Will Be Fine' is a portent mantra to shout from the rooftops amidst some of the most confusing and unsettling times our generation has faced.

"It’s a song about twisted optimism, self-reassurance and hope," singer Haydn Park-Patterson explains. "The overall message of the song seems fitting for the world that we’ve found ourselves in now. Like many of our songs, it has existed in various different incarnations. I wrote the first version of it in the summer of last year and it was originally intended to be a song for someone else’s comfort and reassurance.

"It was shelved until earlier this year, when I stripped it down and kept only the name of the song. It then became the twisted optimistic song that it is now after it was brought in, stripped down and rebuilt by us in the studio. It’s the happiest sounding song we’ve recorded."