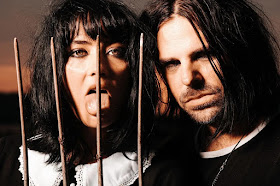 The scorching 'World Ain't Big Enough' - out now on Death or Glory Gang Records - is the fuzzy new big one from London-based rockers Saint Agnes.

Vocalist/guitarist Kitty A Austen's earth-shattering decibels lead the way over the sharp and sinister backing.

"'This World Ain’t Big Enough’ is a song about toxic love: that person that you can't live with or without. Jon and I chose to lockdown together so that we could keep working, and that proximity resulted in a song about two things: being unable to exist in the same space at the same time… but also unable to exist anywhere else," says Kitty.