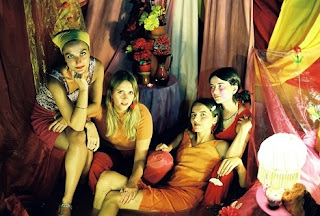 Goat Girl are back for 2021 with a new track, 'Badibaba', along with a video. The track is taken from their upcoming album 'On All Fours', which will be released via Rough Trade Records on January 29.

Guitarist and vocalist L.E.D. says of the song: “'Badibaba' is a song about environmental catastrophe and the pessimism and self-destruction that this causes to the human spirit.” Cream adds, “it touches on how the earth’s existence is controlled by exploitative systems, and the feeling of existential helplessness this induces.”

'On All Fours' was produced by Dan Carey in South London in late 2019. It sees the band delve deeper into unexplored lyrical and melodic territory whilst retaining their critical lens on the worlds injustices and social prejudices.