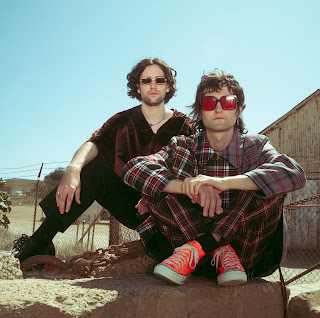 The track is from their forthcoming 'Get A Good Look Pt. 1' EP, out on February 12th. With bubbling bass, syncopated guitars, and memorable vocal melodies over a propulsive four-on-the-floor beat, 'The Look' is a disco-driven, danceable earworm.

"'The Look' was inspired by a comment a stranger made to me while I was out eating lunch," says Chronister. "He interrupted me and asked who my agent was, assuming that I was a model. And then wanted to help represent me. I just kind of laughed because it seemed like such an LA cliché. But he was serious and told me, 'You've got the look of the moment.'

“The verses of the song were inspired by playing a show, like what goes on before Sports shows. Trying to cash in drink tickets, getting nervous. And also a story my dad told me about someone on LSD he saw jump out of a window because he thought he could fly. I don't know if it's a true story or if he was just trying to tell me not to do drugs. I don’t know why, but for me it all connects. The verses are the green rooms, the unhealthy habits, the anxiety. The chorus is the stage. The stage is the drug.”