Eades are back with new label and new track, ‘Former Warnings Cluster’ 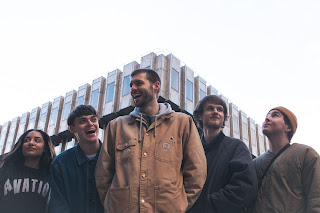 With a new signing to the Heist or Hit! label, Leeds five-piece Eades return with a big new track, ‘Former Warnings Cluster’, to start big in 2021.

“’Former Warnings Cluster’ is probably our most ambitious recording yet," says vocalist Harry Jordan of the release which comes on the back of last year's debut EP, 'Microscopic Things'.

"We’ve always felt we didn’t match our live sound, so we decided to shake up the process. It was recorded live in my basement, with vocals and a few overdubs added later. This allowed us to be a lot more free with the performance, speeding up and slowing down to take the song on a bit of a journey. It was also the first time we’ve ever recorded to tape, which added a load of other hurdles to overcome, but I think the final product is a lot more true to who we are as a band moving forward.”

The meaning behind the garage-new wave inflected song, he adds, is "getting into good habits and then ruining them; about reinventing yourself time and time again to no avail,” he continues. “It follows a protagonist who ultimately ends up in the gutter thinking over the red flags he’s ignored as an ambulance approaches.”