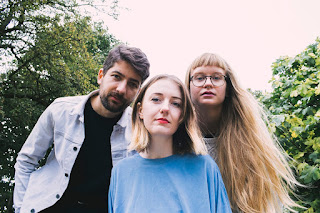 North London grunge-pop trio Gold Baby work up to the release of their debut EP 'Rabbits' on March 26 with lead single ‘Captain Dorego’.

“‘Captain Dorego’ is about feeling overwhelmed,” says vocalist Siân Alex. “It was initially inspired by ‘Big Rock Candy Mountain’, that old country song from the 1920s about a ‘hobo’s idea of paradise' - a modern version of the medieval concept of Cockaigne.

“I wanted to write an even more modern version now that life is busier than ever and it’s so easy to feel like there are a million versions of life that you could or should be living that aren't your reality. It’s crowded with ideas, and I guess that's the point... it’s about craving something simpler, having a busy brain and wanting to go and live in a cabin in the woods or spend all day fishing, but not being sure what you really want at all.”