The Strifes Sing & Tell on being mates, forming over a few beers, and second single 'Keep It Going' 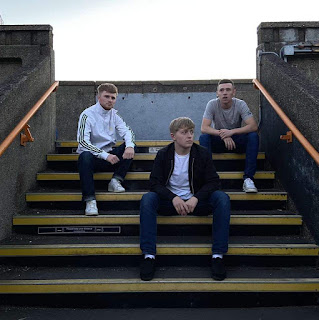 Southampton indie punks The Strifes dropped their new single 'Keep It Going' last month. The follow-up to their boisterous 'All Day and Night' debut of last year, the three-piece have been assigned as a band to be 'big in 2021' by promoters This Feeling.

We are The Strifes a punk/rock band from Southampton, consisting of Taylor Hopper (vocals, guitar), Dom Lawrence (bass) and me, Kai Croissant, and I am the drummer. We are three long term best mates growing up together and doing everything together since young.

We formed The Strifes in the summer of 2020, over a few too many beers and a love for the same bands. Taylor had written at least two albums' worth of songs and would always send rough demos of them to myself to have a listen to. Around a year before The Strifes formed, Taylor had written a tune called 'Little Liar' which we both got together and did a demo of. This lead to us going into our home studio at mine to see what else we could put together and if the tunes he was writing had any legs. Out of those recording sessions at came our debut single 'All Day and Night' which we wrote practically in a few hours, if I remember rightly.
Anyway, come a year later, now in the summer of 2020, me and Taylor thought why don't we form a band and give it a shot. So we headed down to the nearest rehearsal space to play 'Little Liar' and 'All Day and Night' and the rest of the tunes Taylor had written. Dom was doing nothing the days we went into the studio, so I mentioned to him to come down and have a beer. After a while we had pushed the bass on him and he was playing with us. A couple months down the line we released our debut single 'All Day and Night'.

Our influences are The Enemy, Twisted Wheel, The Libertines and The Snuts. We get our big choruses from The Enemy, we had always felt from the start we need these tunes to be huge live with big choruses.

'Keep It Going' a song about walking away from a job you dislike and everything that comes with it. It was mixed and mastered by Peter, who is my old man in our home studio, which is handy really. But we wanted to keep 'Keep It Going' really raw and untouched production-wise.

Unfortunately, due to Covid we don't have any plans to record or for live shows in 2021 as of yet, but you can find our music online.