Watch :: Tune-Yards perform single ‘hold yourself' on US TV 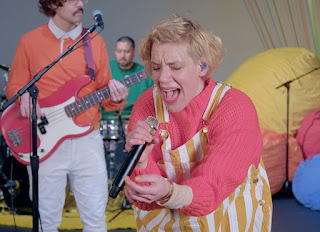 In advance of their fourth album calked ‘sketchy’, which is out on March 26, Tune-Yards last night (February 22) were the musical guests on The Late Show with Stephen Colbert!

The California–based project of musician Merrill Garbus, with long-time collaborator, bassist Nate Brenner, performed their recent single ‘hold yourself’ for the show, which you can watch below.

Garbus had previously described the song as “about feeling really betrayed, by my parents’ generation, and at the same time, really seeing how we are betraying the future."