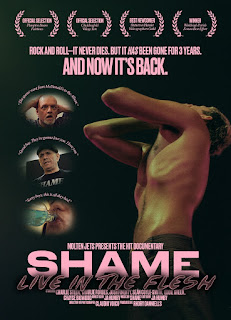 Following the release of their second album 'Drunk Tank Pink' in January, shame return to present Live in the Flesh, a live film directed by Molten Jets.

Recorded at Brixton Electric, the 39-minute film captures shame's scintillating live performance - something which the band first became known for and never fail to deliver.

The viewer is also granted exclusive backstage access with the band ahead of their performance, to witness the behind-the-scenes inner workings of what makes a shame live show so special.

"Flesh has never felt more real than it has in this new blockbuster documentary, shame - live in the flesh. The hits are heavy, the misses are frequent, and the screenplay is near perfection," the band say.