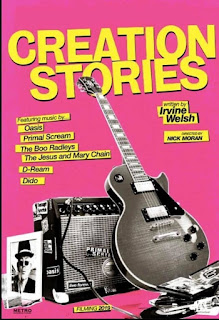 In cinemas from April 15, Creation Stories is the biopic of Creation Records, and based on founder Alan McGee’s 2013 memoir of the same name.

Directed by Nick Moran (who plays Malcolm McLaren), the film was executive produced by Trainspotting  director Danny Boyle, co-written by Trainspotting author Irvine Welsh (who has a cameo role in the film as Titch), and stars include  Trainspotting's Ewen Bremner as McGee himself, Richard Jobson as John McGee, Thomas Turgoose as Dick Green, and Carl Barât as Griff,

The soundtrack will include the music of Oasis, Primal Scream, Teenage Fanclub, My Bloody Valentine, Sex Pistols, The Jesus and Mary Chain, The Boo Radleys, Dido and D-Ream.

Watch the trailer below.