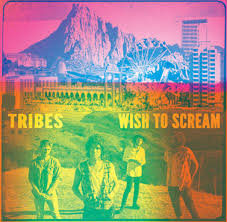 Just 16 months ago Tribes exploded further onto the music scene with their pounding debut album, 'Baby'. The cheeky cliched title let on to what was to follow - rock songs, British rock songs. Personally, it soundtracked most of 2012 - it made a real connection with me. They delivered live, and I was looking forward massively to their teased 'quick' second album that they wanted to release in January of this year, just one year on. After the record label refused, and testing their often poorly received new material on the road aside from 'Dancehall', they now release "Wish To Scream".

Forget what you may or may not know about Tribes, forget what you like and dislike about them, and listen to the album. Alarm bells ring instantly. I just don't understand why a band would want to release this clearly quickly made album so close to their first album - with a "change of direction". Critics who perhaps did not like their first effort will certainly not like this - and fans may not too. 'How The Other Half Live' has incredibly boring drumming, repeating throughout as if Miguel only has two or three parts to his drum kit; and the only change of pace comes at the solo - even then the drums continue the same.

They seem to have forgotten how to write that thing called a single. I am a personal lover of the category of music often labelled as "album tracks". Those that don't quite grab new fans' attention, but are still good; I don't however like "dud tracks", an awfully big category on this album. Failure-to-change-pace-syndrome, as it shall now be called, is coupled with same-repetitive-idea-syndrome on 'Wrapped Up In A Carpet', which particularly drags its heels along the basement floor of a battered, deep South American motel.

After recording the LP in Sound City, the much famed recording studio that needs no introduction, they left the door labelled "band sound" open on the Tribes tour bus. It seeps throughout the whole album, and does not benefit it at all in my opinion. Half-finished ideas scatter themselves over the table they must of drawn up of ideas, and thought: "this will do...?".

They've lost their identity after adding CJ to the line-up - increasing worries and doubts over their album, as piano distorts the rock image they try to give off. Are they just cartoon rockers dressed up to front a record label making scheme? I must make it clear I am a huge fan of their first album, but also at the same time feel hugely let down by this dull album.

'It Never Ends' marks the point of the album where I can safely say the album should of ended, and be scrapped entirely - almost. At least the track is varied, something the album often isn't. 'Graceland' is fantastic, and slap bang in the middle of the album - with the vibe they are trying to channel certainly working. Unfortunately, the praise stops there. The borrowed ideas and image haven't worn well on this album at all. For Tribes, a rethink may be in order, as Johnny states on 'How The Other Half Live', they are in "need of a change of direction". But please, please, get it right this time. Drop the hats, too.