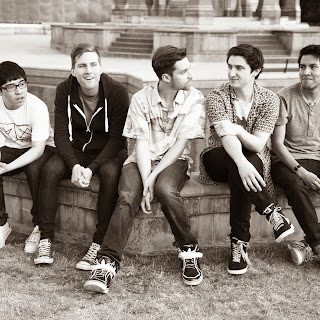 Following our recent introduction to The Savage Nomads (see here) we thought we'd like to get to know the guys a little better, so our intrepid writer Dave Beech settled down for a few words with vocalist Cole Salewicz.

The Savage Nomads are a band who have been doing the rounds for quite sometime now. Championing support from some fairly high-profile names, as well as taking their own brand of indie around the country playing some equally high profile shows. Their latest single 'Jaded Edges' is three minutes of pure indie-pop, complete with synth hooks and hand claps. It's a far cry from their previous releases, yet it also feels like the band's most realised release to date and encapsulates the youthful energy that The Savage Nomads perpetuate perfect.

Hi Cole, thanks for taking the time to talk to us.

First of all, care to talk us through what it is exactly that makes The Savage Nomads who they are, their ethos, if you like?

That’s changed over the years you know; it’s morphed to cover more ground: an ever-evolving philosophy developing in tandem with us getting better as a group, getting older, less stupid... We want to be the best at what we do: to write songs that people can sing back to us, to make them dance and to give them something that feels personal. We wanna stay hungry, stay foolish…

Your current single is called 'Jaded Edges', it feels somewhat more mature compared to earlier releases. What's the story behind it?

The story itself? Well, you gotta listen to the words. One of my favourite love songs is ‘I’ve Just Seen A Face’ off of Help!...I suppose I was just trying to recreate what The Beatles were doing there, a homage to it, if you like…It’s a song about first noticing someone: that flicker of romance can stick with you, maybe forever…

What's it like having someone like Mick Jones behind you from such an early stage in your career?

It was rather a shock playing to his audience when we were only 16 but we relished it. Those Carbon Casino shows in Ladbroke Grove were momentous for us: we came out of them on a massive high, completely ready to take on the universe. He’s popped up a few times over the years and consistently fixed us up with amazing opportunities. He helps out loads of young bands though, anyone he can…he’s got an incredibly generous spirit does Mick! He’s involved with the amazing Rotten Hill Gang who we’ve worked with recently. Keep your eyes peeled…

You've done your fair share of gigging over the last two years, and no doubt played some absolute blinders such as Shepherd’s Bush Empire supporting Big Audio Dynamite. From personal experience however, for every handful of good gigs there's got to be at least one that's been really bad, care to tell us about any shockers you've had?

Haha. Well, yeah, maybe we when we were about 17 and playing horrible Camden pubs to a few old men glaring at us for disrupting their misery. I don’t know if we were shocking or if just the vibe was a bit dark! I quite enjoyed them, actually...

Speaking of gigs, you must have played with some decent acts, who's been some of the best bands to gig to with?

Jon Byrne is a special talent. We played some cracking shows with him up north; he’s got some pilled up nutters following him at every gig so that’s always fun. Who else? We just had a show at The Amersham Arms with a group called Radfru who were absolutely fantastic. They are rockin’ dudes, check em out!

The Savage Nomads seems like a particularly primitive name for such well-rounded chaps, care to explain to the theory behind it?

I saw it written in the stars when I was 13. It was meant to be. When we did Carbon Casino, John Cooper-Clarke came up to me afterwards and told me that he loved the name: ‘it’s just one of those names that’s meant to be in the charts!’ I like John.

In previous interviews you've named a pretty eclectic mix of artists as influences, some bearing little resemblance to The Savage Nomads overall sound. Do you think that influences from artists come from more than just the music they put out?

Yeah of course! It doesn’t matter where you find it. Man, I dig some stuff that doesn’t resemble The Savage Nomads at all! I don’t wanna just listen to indie rock, I’d fall asleep. Check out Explosions in the Sky! Danny Brown!

You currently write a column for Artrocker, a magazine who gave your debut 'Album of the Year'. Was the column the result in them hearing your band, or were you writing for them before that?

Yeah, they asked me to do that when we were stuck in the studio writing songs around the beginning of this year, so fairly recently. My friend Nick Burman asked me; he’s a great guy in a great band called Brazil. Writing that column has been awesome and opened up my ears to so much new music, I’ve met some fantastic acts like The Hypnotic Eye, Bad For Lazarus, Natalie McCool…I just wrote a piece on Alcopop Records who are the real deal, very creative label..

Speaking of niche publications, a lot of your reviews and coverage come from small, independent blogs (such as ourselves). How important for up and coming bands are the small time music press, blogs and so forth?

Massively so, Dave! It’s a personal touch, like E.T. Look out for the little guy…

Finally, what can we expected from the band through 2014 and beyond?

Big bootys in the music videos. I’d like to speak on behalf of the band and apologise for the lack of up to this point. We’re on it…