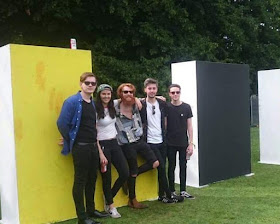 As well as being Track Of The Day, we like this new single 'Champagne Eyes' so much, it has also joined our exclusive 'this is great, mate!' club.

We premiered the last single by St Helens indie pop five-piece Weekend Wars, 'Swim', back in February, and 'Champagne Eyes'  - released on July 21 - is also produced by Al Groves (Paris Youth Foundation) at the Motor Museum in Liverpool - and we would say, their best release yet.

Although we're not sure exactly what 'champagne eyes' look like - like some sloshed toff who's overdone the Veuve Clicquot? - its summery melodic vibe, infectiously catchy rhythms and dancy drums - which still give us Viola Beach chills - is "a throwback in a way to when people made sing-along choruses and is what we really had inside our heads at the time", say the band. Vocalist Jack Arnold has one of those voices that sounds familiar yet probably isn't, but which ultimately draws you in.

And if you like the sound, you'll definitely want to see them live, so catch them at one of these upcoming dates: