Album Review :: The Blinders - Fantasies Of A Stay At Home Psychopath 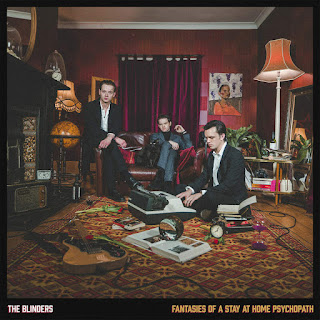 Fantasies Of A Stay At Home Psychopath

Following on from 2018’s debut album ‘Columbia’ (awarded a modest 10/10 by yours truly), The Blinders return with their second child, ‘Fantasies Of A Stay At Home Psychopath'.

Difficult second album syndrome often makes an unwelcome appearance at the door of the recording studio in a grim reaper costume, instantly killing a band’s creativity after a successful debut album. No pressure then...

‘Something Wicked This Way Comes’ sees frontman Thomas Haywood’s plucky guitar lose a valiant battle against a ruthless tag-team of Charlie McGough’s wonderfully sleazy basslines and heavy-hitting drums courtesy of Matthew Neale. It’s more polished and refined than anything on the first album but it still carries the trademark snarling attitude the three-piece instantly connected with on the first outing.

Single ‘Forty Days & Forty Nights’ has that instant grabbing quality in the same way that ‘Gotta Get Through’ was a magnet for the ears on the first record. If you’re lucky enough to see this one live on their UK tour next March you might be served a cocktail of a few wayward pints to the back of the head and a couple accidental uppercuts from over-excitable audience members when this one kicks in.

Not ones to shy away from a political message, ‘Lunatic (With A Loaded Gun)’ cannons into life with the darkly poetic “There are children in cages on Monday’s front pages. This is no history book, this is no play, this is a lunatic with a loaded gun.” There’s a punchy musical accompaniment served up from the engine room but the political message takes forefront on this one with a layering of psychotic whispers holding the battering ram that sees the track through to the end.

When some bands trudge through murky political waters it can be hard to take them seriously as it all too often appears contrived and right out of the Ricky Gervais pamphlet of awkwardness (eyes clamped firmly on The 1975) but, by contrast, it’s always felt a bit more earnest with The Blinders. From past conversations and interviews they’ve always seemed more clued up and sincere in their stance which makes for a more authentic listen rather than a hand over eyes and ears moment.

‘Circle Song’, as the name suggests, doesn’t have any rough edges and it sees the band put on their laid-back Arctic Monkeys sunglasses for a piano-led number. Whilst some will argue differently, it’s not the best song on the album but it still merits a place in the starting 11 as it offers something different.

The half-time entertainment is a spoken-word ballad from Haywood which glides into song of the album and song of the year ‘Mule Track.’ A quick scroll down the YouTube comments to the accompanying video will throw up one or two obscure comparisons to some track by a guy from System of A Down, but regardless it’s a fine piece of work and a real standout moment.

Synths are a welcome new arrival on ‘From Nothing To Abundance’ and work almost in harmony to Charlie McGough’s consistently high-intensity basslines. The band’s visit to Texas last year for SXSW shines through on the twangy guitar riffs which round off a rewarding experimental number.

It’s a surprise that the emphatic ‘Black Glass’ isn’t the last track as it’s up there with the aforementioned ‘Mule Track’ for song of the album with its well-structured six and a bit minutes. As the ballad ‘Orbit (Salmon of Alaska)’ brought down the curtain on the debut, it’s another slow one in the form of ‘In This Decade’ to play us out here. The song adopts a similar role to milk after you’ve wolfed down a Madras, so it’s perhaps a blessing in disguise that it’s here to sail you back to a more regulated heartbeat.

It perhaps seems a tad unfair to score 'Fantasies Of A Stay At Home Psychopath' slightly lower than its predecessor, as in many areas it outshines it, but it’s a sign of how promising this band are that the peaks they’ve reached so early into their career still don’t seem insurmountable. To the band’s credit, they keep raising the bar and on this evidence there’s still unchartered heights they can scale on their next outing.