TOYGIRL Sing & Tell on meeting in Dublin, and the deep infatuation and unconditional love behind new single 'Poison' 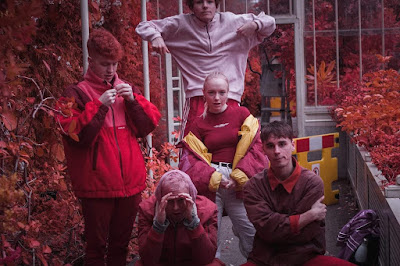 Hi! I’m Hannah Worrall, the lead vocalist. Then we have Fiachra O’Mahony and Ciaran Whelband, who both play guitar. Aran Hopkinson is our bass player, and lastly, Cian O’ Leary Hegarty plays drums.

I’m originally from France and was raised by English parents but the boys all grew up in Cork and West Cork. Myself, Fiachra, Ciaran and Cian met in Dublin in the music college we attend (BIMM). It started off with just me, Fiachra and Ciaran and Aran subsequently joined which is when we played our first gig in Whelan’s back in 2018. Cian joined shortly after that and we’ve been playing together ever since! I think because we all get on so well and are such good friends it just makes writing and working together so closely all the more easy. We just love hanging out, writing music and playing live so it’s been a seamless enough trajectory from the genesis of the band to where we are today – releasing our third single.

I think it’s safe to say that the majority of artists today have a multitude of influences to the point where it can be difficult to make a specific list of genres and artists that we are influenced by. However, when we have had to describe our sound we would usually say Alternative / Pop / Rock. But, because we are a relatively new band and are still searching for our sound / identity in a way, it’s hard to narrow it down to just this or that genre.

I first wrote 'Poison' last summer while I was in West Cork. It started off as a simple set of chords played on a loop on the piano which gave me a base to write the lyrics. I then brought it to the band and together we added new elements and parts to the song, played with time signatures and arranged the structure together. The current version of the song has barely any resemblance to the original concept, and that’s the way we like to work. We like to approach songwriting as a group effort, so although one person might bring in some lyrics, or a chord progression – the finished product is nearly always an equal five-way input split.

For me, this song is about deep infatuation, platonic or romantic. The feeling that someone has accepted your purest form and loves you unconditionally. It’s one of the first songs that I wrote where my words felt transparent and straightforward, in some ways that makes me feel more vulnerable but also more connected to the song. The song was recorded in Windmill Lane Studios, Dublin by our good friend and deadly engineer, Daniel De Burca. The song was mixed by Cormac Butler and mastered by Billy Farrell.

Since Covid, we’ve been afforded some much needed time off after a hectic enough year of gigging, writing, touring and recording. It’s unclear what the next few months will look like for certain, but we’re excited to get back on the road and into the studio! The time off has made us more anxious and ambitious than ever before to get busy and back to work.

We currently have our two other singles on Spotify, and all other streaming and digital music platforms – 'Reign' and 'Moonlight Velvet' – but there are also some videos of us playing live and a lyric video on YouTube.