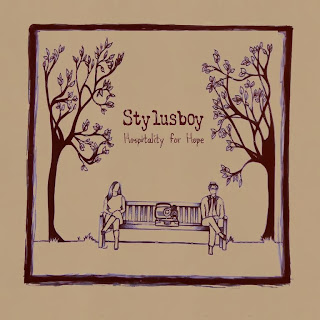 Just under five months ago, I reviewed the most recent EP from Coventry-based acoustic folk duo, Stylusboy. Four tracks and 15 minutes was all it took for me to realise that I was in the midst of something special; lush textures, rich harmonies, an irresistible penchant for lo-fi aesthetics and above all, a huge level of stripped down romance that ultimately made for a timeless record. Fast-forward 18 weeks and as the opening notes of their first full-length, 'Hospitality for Hope', begin to ring out, I can already feel the smile, a permanent fixture throughout my last review, return, brought on by the familiarity of Steve Jones and Rachel Grisedale's effortless vocal duality. It's a welcome return for the duo, whose tireless work ethic and sheer passion for their craft is palpable across every aspect of their debut.

Though several songs have been streamed online already, hearing 'Hospitality for Hope' in its entirety is a quaint and colourful experience. There's an uplifting and occasionally whimsical sincerity about the whole record, never failing to see the silver lining in every bad situation. Tracks such as 'Closer' or 'Love's Tale' perpetuate an optimism rarely exhibited in folk music, and that, despite it's pop sensibilities, is precisely what 'Hospitality for Hope' boils down to, a contemporary folk album that's not afraid to smile.

From the folk-driven ('Eyes Form Tears') to those flecked with an American indie influence ('Lantern'), every track throughout is worth mentioning in some way. The production, though better than on the 'Lantern EP', still maintains a degree of rawness in fitting with the band's DIY ethos, something which bleeds through in to live performances and even the record's hand-crafted packaging. It's refreshing to see an equal amount care going in to the artwork and case as much as the music itself whilst the fact that artists they've worked with before were used again make it all the more charming.

Unsurprisingly, the latter two songs on the record feel like the conclusion you'd hope for, as if everything prior was leading up to them, more than just chronologically. The eponymous 'Hospitality for Hope' sounds like the soundtrack to an early afternoon at a festival, and would be the perfect end to a live performance, the duality of Jones and Grisedale's vocals once again working effortlessly with each other, providing added layers of texture in to an already rich ensemble. Album closer 'Hold Your Hand', however, is perhaps the most stripped down track on the record. A muted acoustic guitar forms the rhythm, whilst the duo's idiosyncratic shared vocal carries the song towards its conclusion with tangible emotion and candour.

'Hospitality of Hope' feels like a natural progression from the EPs on which it's built and well it should. Both Jones and Grisedale alike have come into their own over the 18 months in which it was written. There's an air of confidence about them, evident even in their most privy of moments, and while the album is full of sincerity, there's still elements of light-heartedness behind it. Stylusboy have been making waves for a year or so now, but 'Hospitality...' could well be the album with which they break through. And so it should be.