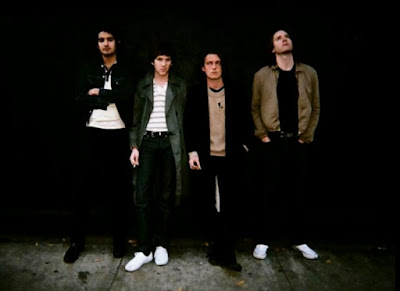 "George Orwell was a true prophet. There are too many CCTV cameras in your country! The hotel incident is just one example of how a surveillance state and wild parties mix like oil and water."

There seems to have been no stopping New York's Public Access T.V. The four-piece - John Eatherly (lead vocals, guitar), Xan Aird (lead guitar, vocals), Max Peebles (bass, vocals), Pete Star (drums, vocals) - have been winning praise on both sides of the pond through supporting the likes of The Strokes, Weezer, Gang of Four, Fidlar, Hinds and Palma Violets on tour, as well as for their recorded output such as 'In Love And Alone'/'Patti Peru', their double-A single out late last year, and their new anthemic garage track 'On Location' - which you can watch the video to below.

Now back again on British soil for dates with Hinds -including Birmingham's O2 Academy tonight (February 12), and London's Birthdays on February 25 as part of the NME Awards Shows tour - we had a few words with T.V. frontman John Eatherly.


So, John, back in the UK again for the NME Awards Show at Birthdays and a few other dates....

John: Yeah, touring the UK and a bit of the continent through the end of February. Gonna be cool.

What can we expect from your set this time around? Will it be focussed more on material from the album?

Yes. We've been working on a brand new set with five songs from the album that we've never played live. Maybe we'll work some heavy jams in too.

I don't think you've played this London venue, Birthdays, before? Did you have much chance to check out other bands and venues when you've been over previously?

We've partied there before, but never actually seen a show there. We don't really go to many shows, especially when we are already on tour all the time but I remember seeing a few bands last time who were cool at some random bar.

Going back to last summer when you had your brief stay here to record the album, I gather that was quite an 'eventful' visit - as far as hotels go at least, no?! So what did you all get up to and how many wild parties did you do?!

George Orwell was a true prophet. There are too many CCTV cameras in your country! The hotel incident is just one example of how a surveillance state and wild parties mix like oil and water.

[he declines to go further into the "hotel incident". Make up your own tales!] But there was of course another purpose during that trip, to get in some spontaneous live shows and also record the album. In the former, what has been the British response to PATV? Do you notice any difference in the crowd reaction here to back home?

British audiences get it. American ones don't...yet! This puritanical country of ours doesn't allow anyone under the age of 21 into most shows. How do you expect rock'n'roll to survive in the shadow of such a law?

How much does it mean to the band to be accepted outside of the US?

It is great. We really are psyched to play for anyone who likes our music wherever it is. We definitely would like the same to happen in America though since it's our home.

You have the first album on the way, can you tell us a bit how that went last year: did you finish it here, or in the US?

We just last week finished mixing the record at Electric Lady in New York. So aside from mastering, our album is done - which is a major relief. We're like a mother in olden days who has just given birth after a long arduous and painkiller-free labour!

Do you have a particular favourite track or two?

I think each of us has our own favourites. It would be messy and undiplomatic to untangle in public who prefers what. We'll let you decide for yourselves.

What else is upcoming from PATV?

A second record. Years of non-stop touring. Our own version of the Led Zeppelin shark incident. [Anyone who doesn't know what this refers to, Google it.]

I saw in one interview you gave you mentioned Phil Lynott and Thin Lizzy - a big influence?

Thin Lizzy is one of our favourite bands and hopefully a major influence on our music. And Phil Lynott's solo stuff is pretty fucking choice too.

Who are your own musical influences, past or present?

I noticed your tweeting the other week in reference to Elton John and his including you in his Beats 1 playlist. Pretty rad! Is he now your biggest fan?

That was crazy. I have no idea how Elton came to hear our music, but we were psyched. We have mad love for Sir Elton.

Finally, give us a few things that you are checking out musically right now? 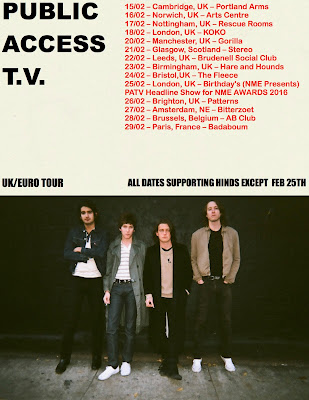