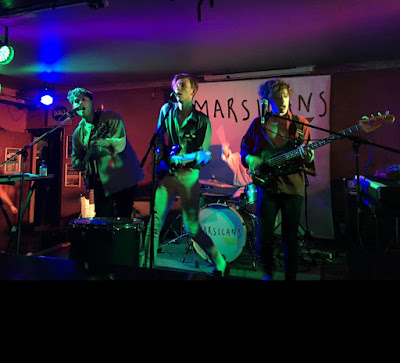 A great band isn't a great band until they make me go, "HOLY SHIT!" when I watch them live. Marsicans made me do that, which was quite amazing considering that was my first time seeing them live after been listening to their music, kind of religiously for the last month or so.

Coming all the way from Leeds, James, Oli, Matt and Rob performed a short set - for me anyway, but it's quality not quantity, no? - at the Tooting Tram tonight as part of Radio X DJ John Kennedy's regular Remedy nights (and a night which they have also played before). They sang a few songs, a couple from their EP 'The Chivalry', and of course, their latest single 'Arms Of Another'.

Their vocals all synchronized quite perfectly. Individually, however, their stage act is a whole different story. Bassist Rob Brander is definitely the most active one compared to the others - it's hard to ignore his stage presence with all that dancing, arm movements and the jumping up and down. But don't think because Matthew McHale is slightly hidden behind his drum set, he's just sitting there quietly - no, he is not! And both vocalist/guitarist James Newbigging and guitarist Oli Jameson offered their own personal stage style, vocally and guitar-wise.

'Swimming' and 'Absence' -with a soupçon from Whitney Houston's 'I Wanna Dance With Somebody' - and 'Chivalry', the title track from their 2014 EP, we got tonight, but only left the crowd hungry for more, and after pretending to say goodbye and leave the stage - they then returned after the "We want more!" chants.

All in all, a short, but memorable, gig. I only wish it had been longer, because while it may have been a lot longer in practice, it still only felt like five minutes to me.