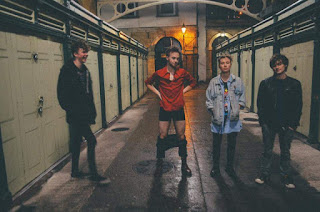 Bristol's Four are aptly named, given that there are four of them: Annabel, Jake, Oli and Alex. Little Indie came across them last month, not on their Avon home turf but by the sea in Brighton at the Great Escape, where there had taken to pound the pavements handing out flyers.

Investigating further, we find that two of their four, brothers Jake and Oli Edwards, were previously with The Jacques, and that Four had released their debut single 'Take Something' earlier this year.

Taking inspiration for their sound from sources such as Wolf Alice, Pixies, The Strokes and Weezer, with their female vocalist Annabel they create a fine dynamic of explosive vocals and driven guitars to create a raw indie rock-crossed-with-alt-pop sound.