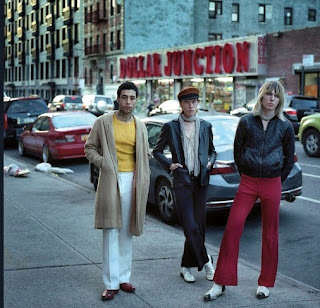 At just over two minutes,
Beechwood's 'Ain't Gonna Last All Night' feels far too short. Or maybe it's more to do with the video - directed by Nika De Carlo and the band's Gordon Lawrence - that you can't keep your eyes averted from, rather like opposite someone on the tube watching as they apply a full face of make-up.

Taken from the album 'Songs From The Land Of Nod', out January 26 via Alive Natural Sound, the New York psych/punk glam-rock trio blend guitarist Lawrence's absorbing garage-rock vocals to a song lyrically focussed on the 'masks' we wear, hence the visual depiction.

"It's no big mystery to me why Americans are so fucked up right now on uppers, downers, anti-depressants or whatever else Dr. Feelgood will prescribe," he says. "It's much easier to mask the symptoms than confront them. 'Ain't Gonna Last All Night' is about this; it's about the little things that people try to hide from each other that really make any given person who he or she is."