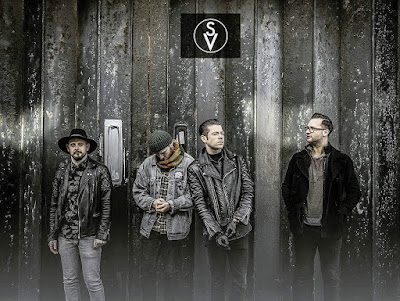 Alt-rock, Somerset-based four-piece Some Villains describe their sound as 'angular, punctuated by large sounding drums, unusual rhythms and chord inversions; all attempting to straddle the line between the experimental and the accessible.' Their second EP 'Outliers' is released on March 17.

My name is Luke Tozer and I play one of the two guitars in Some Villains. Ed Graves is our vocalist and plays the other guitar. Jake (aka The Jackal) Beckett is on bass and Stu Donovan pounds the drums!

Tell us something about yourself and how you came to be where you are today?

Ed moved from London to Highbridge in Somerset where we are based. Some Villains was the working name for his musical projects up to this point. We met through a mutual friend and realised we had a lot in common musically. Ed played me a few of his demos, which I was impressed by. One of which, was 'The Skin' - we got the guitars out and had a bit of a jam. We must've got carried away because the next day I had a few noise complaints from the neighbours!

From there we got a band together with the most like-minded drummer we know (Stu) and another bass player. We self-produced and released our debut EP 'Lizard Teeth', played a few gigs around the South West and managed to get one track from the EP - 'Heredity' - played on BBC 6 Music! A

Influences are always hard to pin down because they're very subjective and transient. Stu is a huge shoegaze guy, so he loves bands like Slowdive, Ride, My Bloody Valentine etc. We're all into the huge hitters like QOTSA, Nine Inch Nails, The National, Sonic Youth, Smashing Pumpkins, Radiohead, etc. I really like Thee Oh Sees, Tame Impala, LCD Soundsystem. Ed is big into his composers like Nils Frahm and Hans Zimmer. He really likes the Phil Spector 'wall of sound' thing so sometimes we have temper that impulse! Jake is a musical sponge and loves anything from Iggy to Robert Johnson and The Memphis Jug Band! I'll stop now because I could go on forever!

The songwriting process is somewhat open and, I think, a process that is being honed the more we do it. Every song calls for a slight variation and we're not rigid in how it is applied. It usually starts with an idea/demo that someone has bought in and we'll jam that in the room together. We'll get comfortable with a rough structure and keep playing it, adding little bits here and there. If we're really happy with it we'll put together another demo and add more touches here and there, the same for when it comes to the actual recording. In a way a song is never really finished; there are always more and more parts you could add - at some point you just have to say 'enough is enough' and take step a step back.

'The Skin' really recalls Tom Wolfe’s message “you can’t go home again”. It’s about separation, longing, loss (romantic, familial, whatever). And it’s about the understanding that after something’s been broken apart once, no matter how perfectly you re-assemble it, it will never feel the same, or be the same…the light would always show through the cracks.

Stylistically, it's a pretty straightforward alternative rock song. That's not to disparage it in anyway; it's got all the thrills and spills you'd hope for in a brooding rock composition, but hopefully without any of the pretension! It's a very genuine sentiment and, without sounding all 'Wayne's World', there's a couple of killer guitar solos in there too!

We've got a gig in our hometown of Burnham on Sea at The Old Pier Tavern on March 17 which we are tentatively calling an EP launch night for 'Outliers'. We have qualified for the final of the Pilton Party Auditions, which, if we are successful, means we'll be playing at the Pilton Party 2018. If anyone wants to come and support us for that, please head to the Pilton Working Men's Club on June 30 (we'd really appreciate it!).

We will also be playing at 229 in London on June 1, and the Sat In A Field music festival on Sunday August 5.

We have already begun work on the recording of the next new material after 'Outliers' - we spent a day in Orchard Studios, Somerset, recording drums and we're going to start laying the tracks down for the new songs one by one, releasing them as we go. Other than that, more gigs, more writing and trying to get our music out there into the ears of whoever wants to listen!

You can hear more of our music on the usual channels, Spotify, Apple Music, Google, Amazon, wherever else.